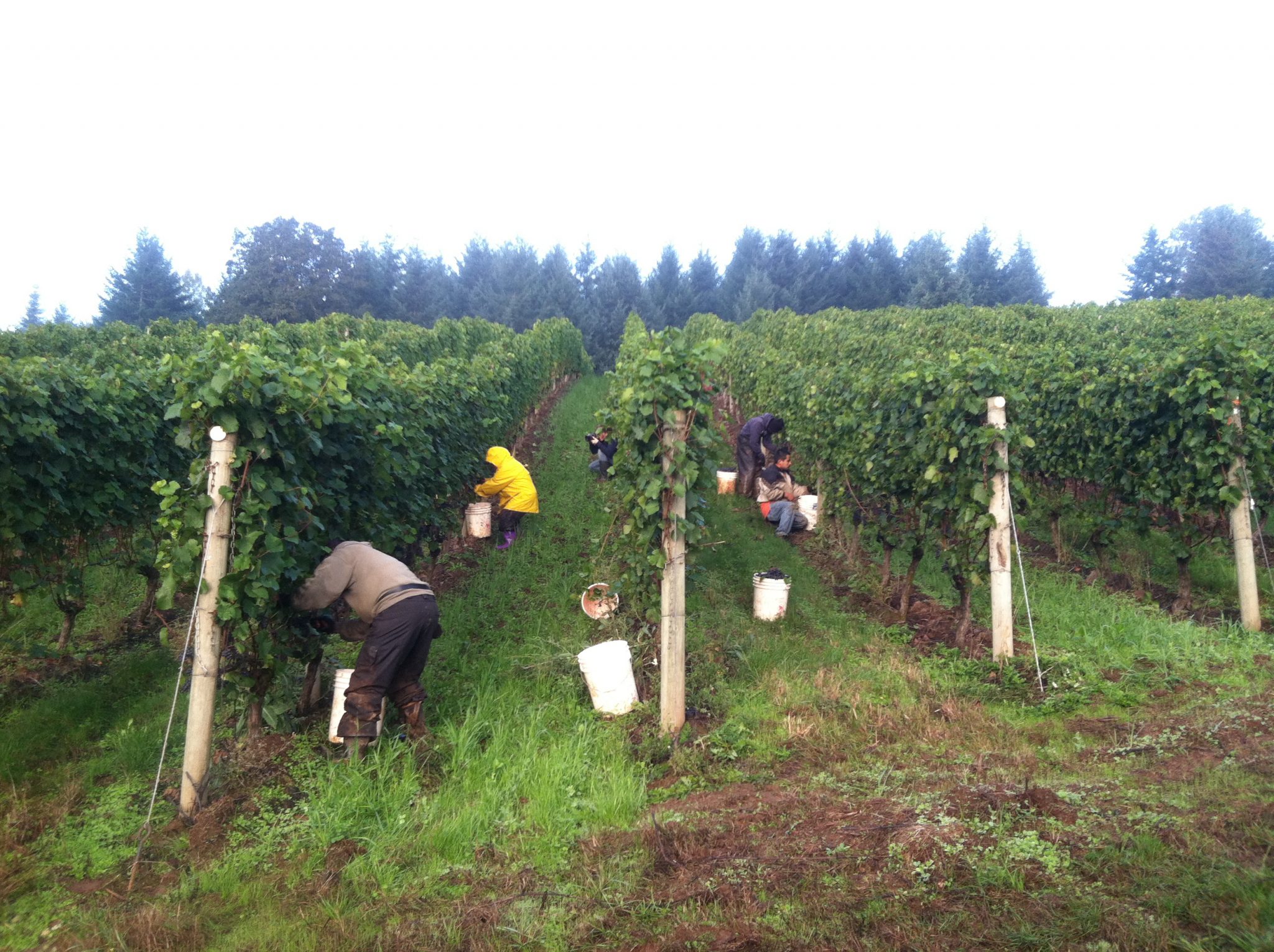 Provided by the Oregon Wine Board

Oregon’s 2013 wine-grape harvest may be best remembered as a play in two acts, with a wet intermission. The 2013 harvest was definitely not for the faint of heart. What looked like a potential uneventful and easy harvest going into September turned out to challenge even the most skilled vintners when the warm, dry summer was abruptly interrupted by a weekend of record rainfall.

Winegrowers throughout the state, however, are optimistic that the 2013 harvest will result in solid wines, even great wine in many instances – not that it wasn’t a nail-biting route to get there.

The vintage began warmer than usual with early bud break across most of the state’s wine growing regions, which led into a long, warm summer. That was followed by the jarring interruption of the late September rain with a final redemption of more dry and warm weather through October. Some believe that this high drama also brought with it inspiration in the form of creative vineyard management and virtuoso winemaking.

The 2013 harvest began on a high note in September, with some harvesting as early as the first week, but most of the harvest was well under way by the middle of the month. It was the earliest start to harvest in a number of years. The warmth of the long, dry summer raised expectations of warm weather vintages in 2003 and 2006. All of that came to a screeched halt in the final week of September when the still powerful remnants of a typhoon that hit Japan a few days earlier barreled ashore.

While some had already harvest ripe fruit – especially white varieties – much of the crop remained on the vine through the final deluge that hit the weekend of Sept. 28-29. Thankfully, the rains gave way to an extended warm and dry period that lasted the entire month of October and allowed most producers to resume harvesting, albeit with new challenges. Some vintners, who refrained from harvesting until after the rain, were able to gain the benefit of extended hang times, which produced brilliant fruit. One Columbia Gorge winegrower termed October’s excellent weather “the endless summer.”

The challenges created by the September rain seemed to be more evident in the Willamette Valley, but even there, the range of effects varied. As the rain gave way to a prolonged Indian Summer, rot and mildew became a problem for some while others experienced difficulty maneuvering equipment on the mud-slickened slopes.

The harvests in Southern Oregon and Eastern Oregon were less affected by the rain. Some growers in those two regions are downright giddy about the quality and size of their crops.

The 2013 harvest in Oregon appears to be larger than 2012, possibly in the low double- digit percentages. One knowledgeable winegrower believes the yield could top the 2012 record harvest of 50,000 plus tons by as much as 20%. Others are somewhat more hesitant, predicting yields will be up in the 10%-15% range.

Winegrowers optimism grew as they worked their way through the harvest. “The real key is how good was the vintage before we got the rain,” said one veteran winemaker. “There was a lot of concentration and ripeness before the rain came.” Others speculated that the fruit may have been further along than most thought when the rains came.

The primary issues created by the rain – depending on individual situations – was managing rot and mildew and accurately predicting picking times. In most of these instances, the calls were made daily if not hourly for fruit that was nearly ready to pick when the rains came.

“It became a race to harvest the fruit that was most vulnerable to the effects of the rain,” said a Salem area grower. “We saw the onset of a lot of problems all at once due to the rain. We flew during that period. It was a real challenge to figure out what blocks come off when.”

Another pointed out that the rain demanded extreme vigilance as the harvest continued, requiring extra careful sorting in the field and again at the sorting table in the winery and close attention throughout fermentation.

“If you had late fruit, it hung awhile and the conditions got great,” said a mid-Willamette Valley grower. “I have some of the best whites I’ve ever made in the cellar.”

In the Columbia Gorge where producers are optimistic about the 2013 vintage, the extended warm weather in October, combined with long hang times is pointing to not only a high quality vintage, but yields up to 50% larger than a year ago.

Some Southern Oregon sites are in a similar situation. “The weather was near perfect for Southern Oregon,” said a Rogue Valley grower. “The vintage seems to be well balanced and clearly a near perfect year. The fruit set was heavy and allowed us to drop fruit to get the best clusters for the wine.”

The Umpqua Valley experienced its warmest vintage since 2001, making for very ripe fruit early with high sugars and trailing flavor. There, the crush is expected to be one the best ever in terms of quality and quantity.

Northern Willamette Valley growers, while facing some high risk days around the September rainfall, seem to have largely managed through the situation despite some stressful and uncertain days. Yields may have been down slightly in areas that were inordinately affected by the rain event. But, for those whose fruit was solid at the time of the rain, prospects are shaping up for an excellent 2013 vintage.

“Key blocks were on the mark, especially those harvested a week or two after the rain event,” said a Chehalem Mountains producer. “With longer hang time and beautiful protection from botrytis, they held until perfect ripeness.”

“To taste through the cellar, you could have said we had an absolutely normal harvest,” said one winemaker who has high hopes for the 2013 vintage. “The results turned out so well, but that doesn’t mean it was easy.”

The 2013 Oregon harvest experience once again tested the mettle of Oregon’s winemaking community whose members often view their ability to continue to produce stellar vintages in the face of whatever Mother Nature can throw them as the real test of making great wine.

Said one veteran vintner with many years of dealing with similar unexpected curveballs, “Contrary to casual anecdotes from critics aghast at five inches of rain, expect the best of most of the 2013 wines. The best wines from 2013 will be equal to our best from our superior years.”