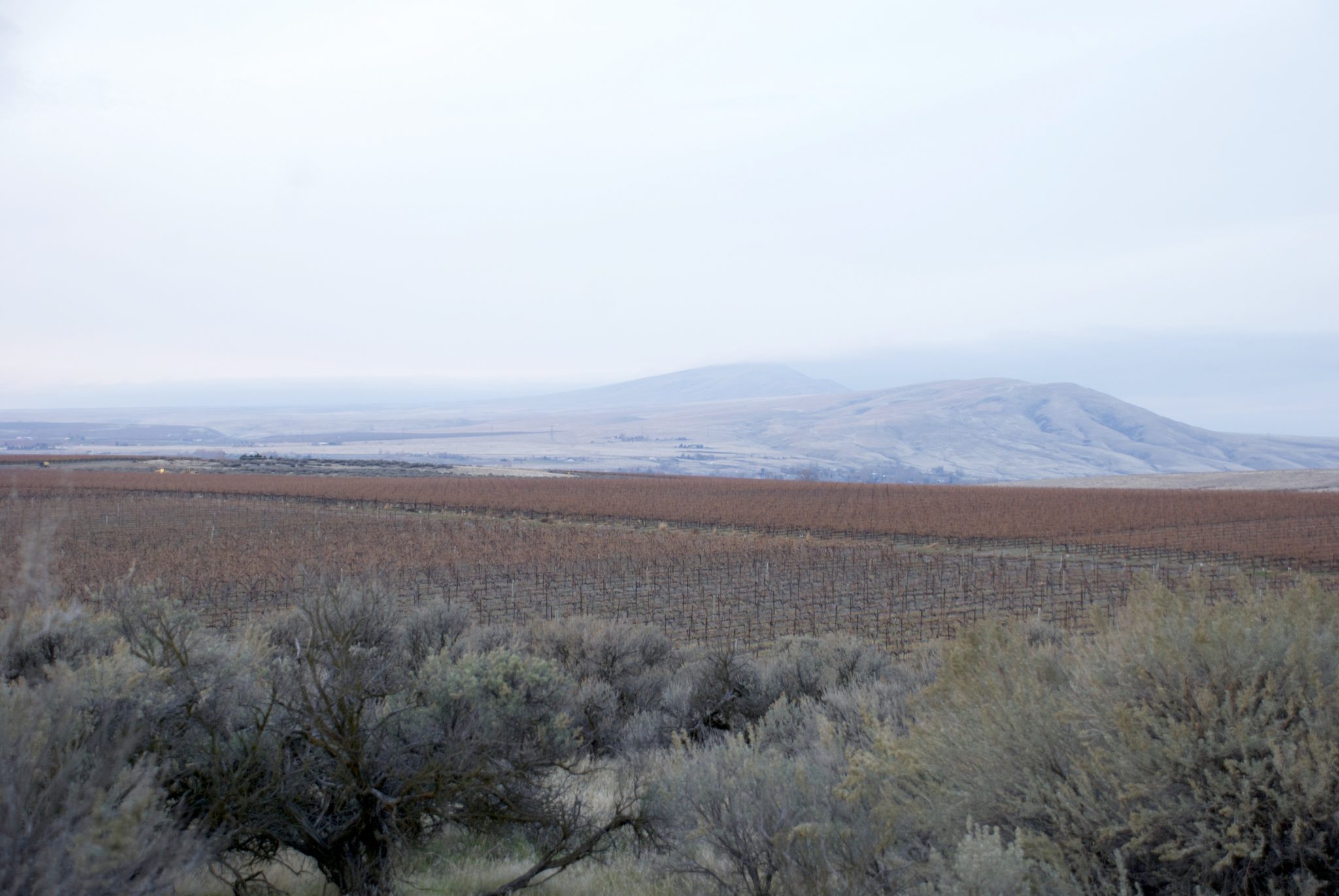 The Red Mountain American Viticultural Area (AVA) is located in Washington State and produces some of the most sought after grapes in the US. Located along a steep slope facing southwest near the Yakima River, there are about 1400 acres planted in grapevines. Elevation runs between 540-1410 feet above sea level from the crest of the Red Mountain to the North, to the Yakima River to the West and to a Columbia River tributary to the South, creating a triangle of sorts. Named after the drooping brome (“cheatgrass”) that covers the mountain in hues of red through the spring, the Red Mountain AVA is about a 3 1/2 hour drive to the Northeast from Portland, and 3 3/4 hour drive to the Southeast from Seattle.

Predominately planted with Cabernet Sauvignon, Merlot, Cabernet Franc, Syrah, Sangiovese, Malbec and Petit Verdot, the Red Mountain AVA is extremely arid with desert-like conditions year-round and an annual rainfall of 5-7 inches. During the growing season, the daytime temperature averages 90 degrees and falls to below 50 degrees most nights.

The Red Mountain AVA has very unusual soil as a result of the massive Missoula Floods that repeatedly engulfed the area over thousands of years. Created by the bursting of a giant ice dam in Montana, sediment was regularly carried to the region, with a backwater eddy forming where the Red Mountain AVA is located. This combination of sand, silt and loam soil types are perfect for growing wine grapes and allow each vine to form a well-established and deep root system to reach the necessary nutrients and moisture in order to survive and thrive in the arid conditions. It also deters most grape predators, including the dreaded Phylloxera root louse and Glassy-winged sharpshooter so the majority of Red Mountain grapevines remain ungrafted with little need for fertilizers or pesticides, creating an environmentally friendly growing region.

Cooler evenings with temperature drops of 40 degrees or more help to retain higher acid levels. Red Mountain gets two more hours of sunlight than the Napa Valley during the growing season, for an average of 17 hours per day. During the summer, warm gusts travel up to Red Mountain from the Southwest, keeping the grape clusters small and the fruit flavors concentrated. In the autumn, cooler air comes from the North, down to the river, helping to prevent early frost while the grapes mature. The resulting fruit has both balance and structure, creating powerful and tannin red wines.

The first grapevines were planted in 1975 and the 2010 current count is 35 vineyards with another 1000 acres of grapevines planned in the near future and 15 wineries located within its boundaries. Grapes grown in the Red Mountain often command prices over three times the state average price per ton.

Robert Parker’s The Wine Advocate lauded Quilceda Creek Vintners 2005 Cabernet Sauvignon, made with grapes sourced from three Red Mountain vineyards, along with one from the neighboring Horse Heaven Hills AVA with an outstanding 100 point score.