Brooks Winery has a bittersweet story, one that has touched many wine lovers throughout the Willamette Valley. The sudden death of young winemaker Jimi Brooks shocked the Oregon wine industry just 10 years ago. In fact, the Brooks Winery story is so compelling that it has recently been featured in the wine documentary, American Wine Story.

Jimi died just as harvest was starting in the Willamette Valley. His death hit the entire wine community hard. So much so that by the time Janie Brooks-Heuck, arrived from her home in California, just hours after her brother’s death, the many winemaker friends of the well-loved Jimi had created a plan of action to tackle harvest. Their goal was to ensure that Jimi’s eight-year old son Pascal could eventually inherit the Brooks Winery legacy.

Once the group developed a plan, Janie agreed to take the winery reins and has grown it by 400 percent since his passing. She has worked hard to build both the reputation and business of Brooks Winery. Hiring passionate people from winemaker Chris Williams, Director of Hospitality Heather Kirk and Director of Wine Education and Communication Jess Pierce, has further helped to strengthen the brand. The Brooks team’s most recent and, possibly more significant accomplishment, is the completion of their new winery facility.

Contractors broke ground this spring and had the pending harvest as a hard deadline. Working practically on top of one another, the crews diligently toiled at an almost unheard of pace. Less than five months later, the winery is open, just as an early harvest begins.

Follow this link to watch a short time lapse video of the construction from start to finish. 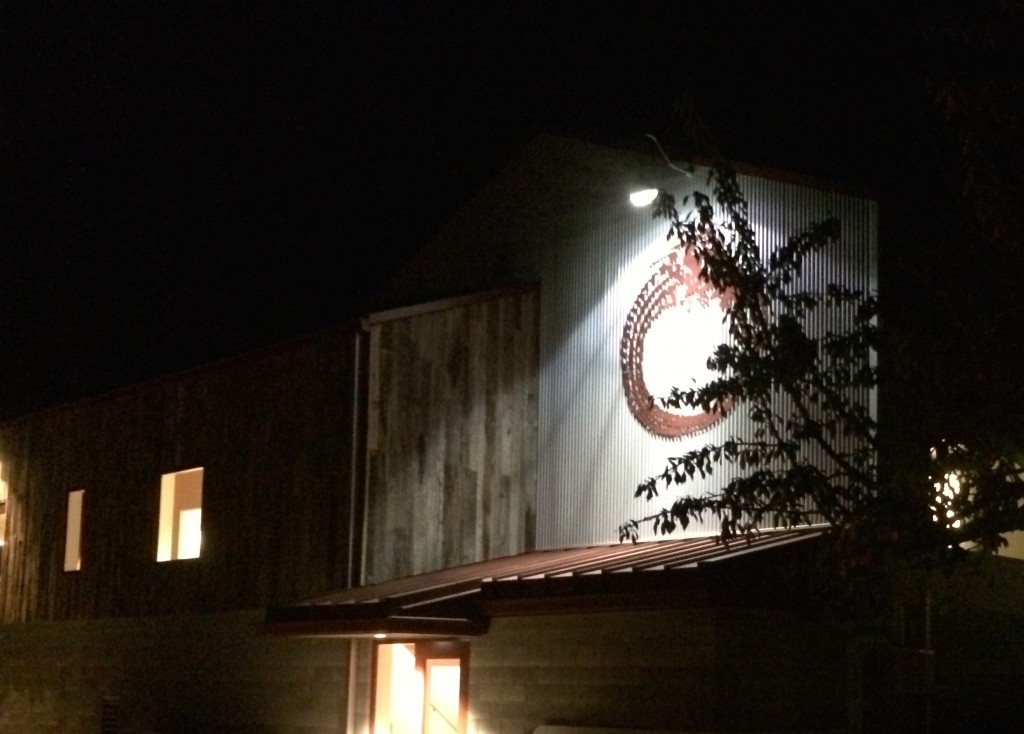 As visitors turn down the driveway and enter the parking lot, the rustic exterior clad in reclaimed barn wood from the Midwest welcomes them. The original plan was to face the building with cedar but when reclaimed wood became available at a very reasonable price, plans changed. The barn wood gives the winery an instant, aged look. 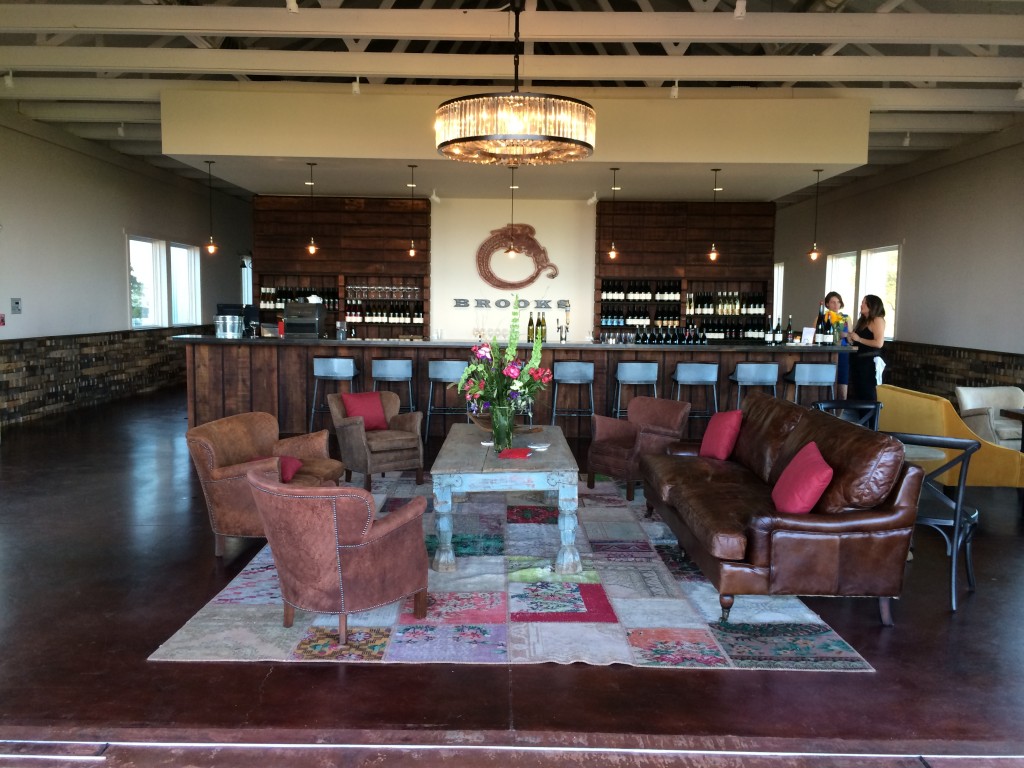 Once inside, it’s immediately apparent that the entire winery space was carefully designed with practically everything in mind. Windows throughout the tasting room take advantage of views from the vineyards to the majestic Mt. Hood to a bird’s eye view of the cellar. As harvest ramps up, visitors can watch the cellar rats (a loving term for wine interns) as they sort fruit, perform punch downs and skillfully care for the fermenting juice as it becomes wine. And after busting at the seams in their former winemaking space, the staff will be able to spread out within the bright and shiny new winery.

Visitors can belly up to the wine bar or choose from a number of comfortable spots that make it feel more like you’re in the living room of your wealthy, eclectic aunt and uncle than a winery tasting room. The circular overheard chandelier is breathtaking without feeling out of place within the more rustic casual décor. A relaxing seating area, complete with a distressed coffee table ready for wine stains sits atop a patchwork rug covering the polished concrete floor. The walls are lined with recycled barrel staves. Look closely and you’ll see many of the staves are branded with the logos of the dedicated group of winemakers who helped with that fateful harvest, immediately following Jimi’s death. 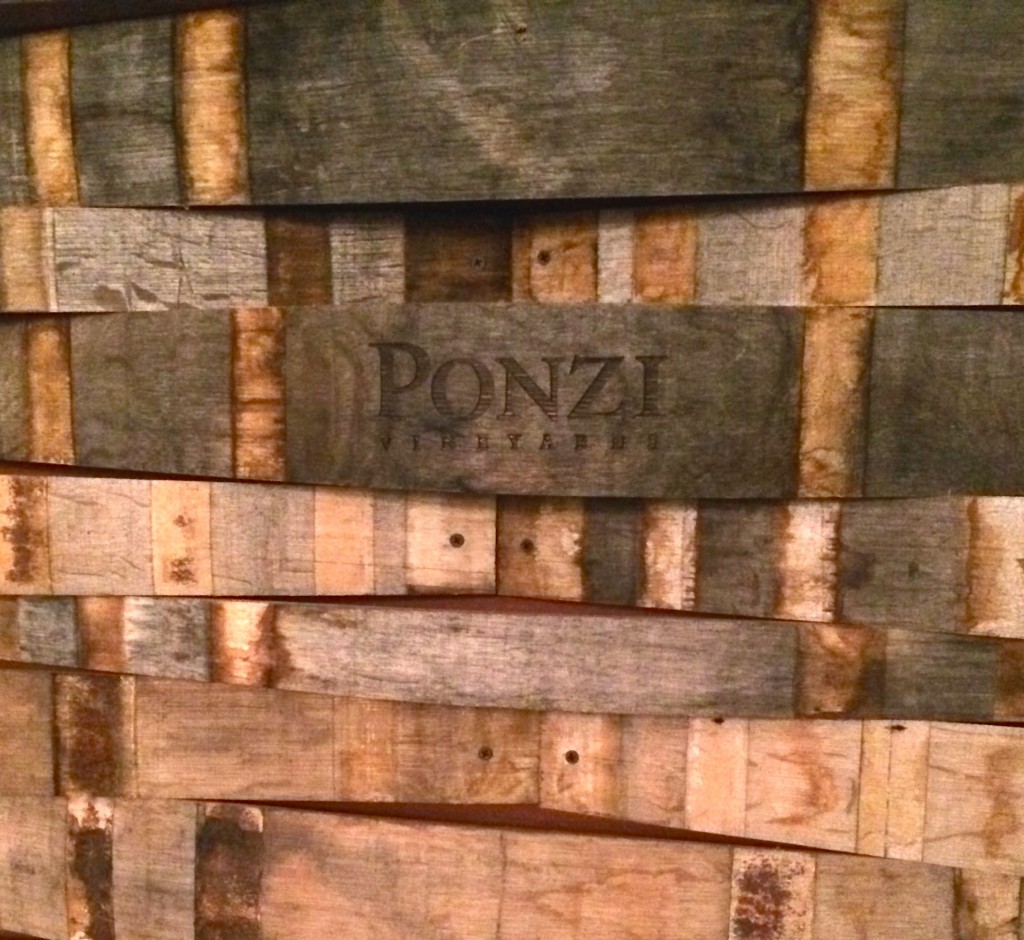 Practically an entire wall opens up to a large, covered deck that projects out from the tasting room, seamlessly extending the space. Considering the amount of rain the Willamette Valley receives each year, the new winery design ensures that comfortable outdoor spaces are accessible, regardless of the weather. Sitting on the casual teak benches and chairs out on the deck will surely be a favorite new pastime for many Willamette Valley residents. 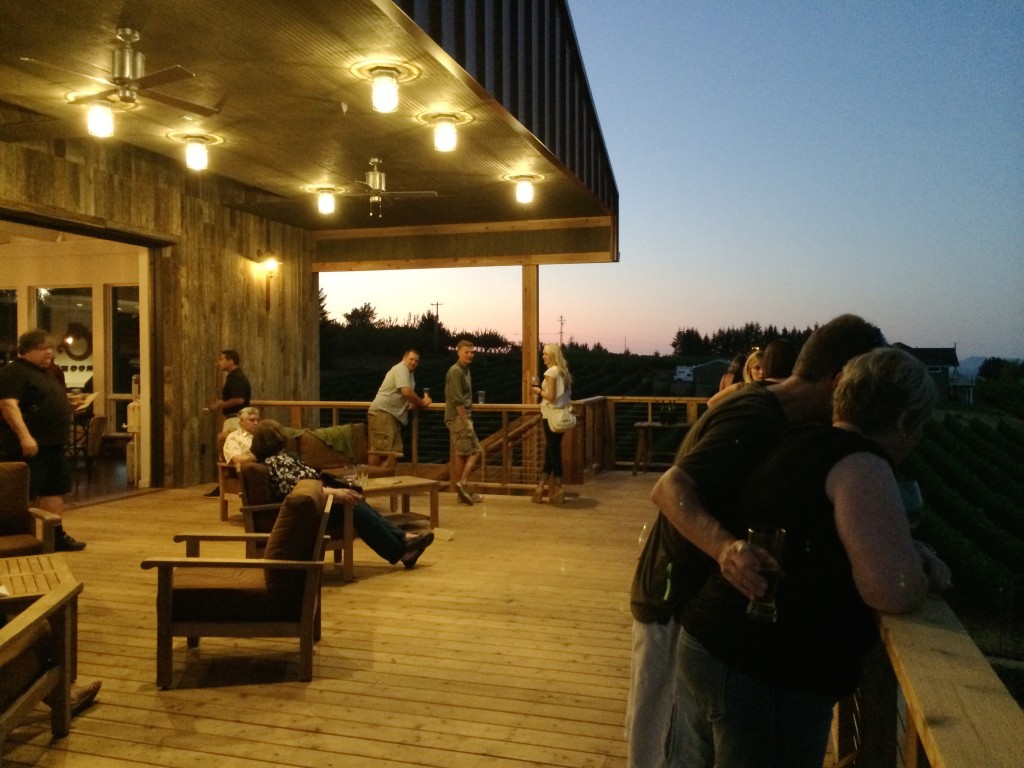 Down the stairs, directly below the deck is more covered outdoor space with a TV (perfect for those who don’t want to miss the football game), a large pizza oven, metal chairs that look to be made from the wire hoops of former wine barrels and a fire pit to keep the chill away. 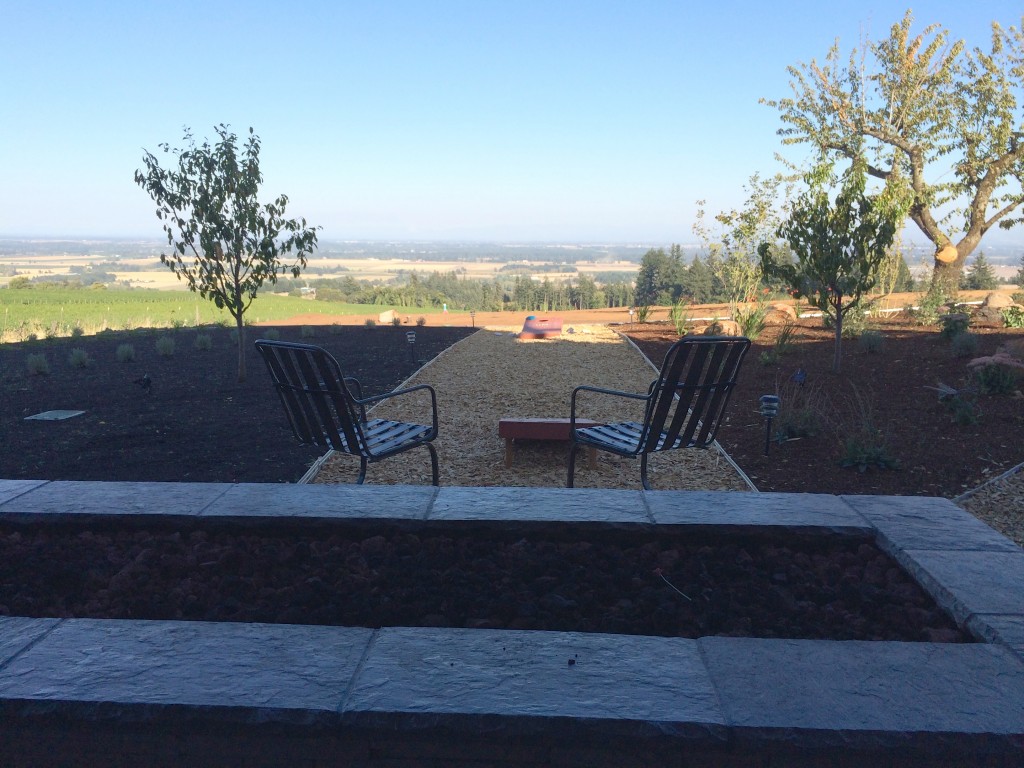 Those who like to play can enjoy a game of cornhole and immature landscaping will fill in with time, bound to create a lush, meandering oasis, perfect to stroll through while sipping Brooks wines. Not only does the winery offer several different wine flight options, but also beer on tap from a local brewery (with a second tap coming soon) along with fresh coffee. 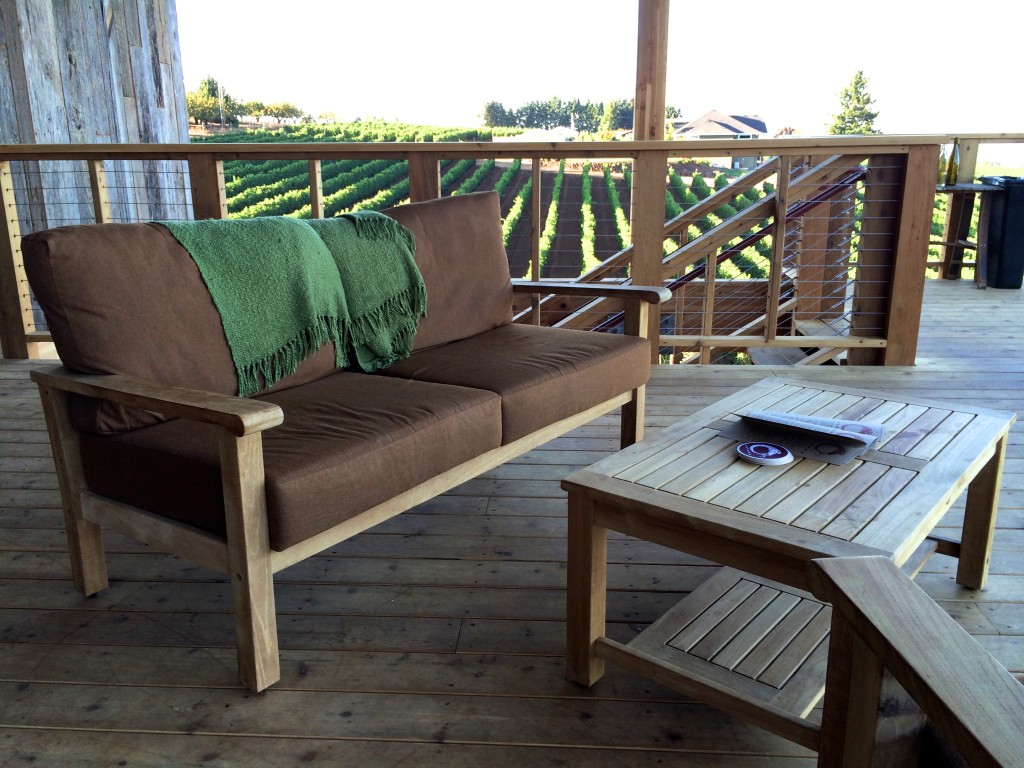 So pick up some picnic fixings, pull your car onto the Wheatland ferry as a fun way to traverse the Willamette River and head up the hill to the new Brooks Winery. Once you’re there, peek through the cellar window and give a wave to winemaker Chris. After Heather has poured you some wine, please don’t forget to raise your glass in honor of the dream of Jimi Brooks and the legacy that continues with the hard work of his sister Janie, son Pascal and the rest of the Brooks team.

Here is a sampling of the current releases being offered in the Brooks Winery tasting room:

2012 Brooks Yamhill Vineyard Riesling
This Riesling is from the Yamhill-Carlton sub AVA of the Willamette Valley and has abundant summer fruit aromas of white peaches, apricots and blooming honeysuckle coupled with a hint of petrol. The flavors range from sweet apricots and honey to lemon zest and mineral notes reminiscent of fresh rain.

2012 Brooks Bois Joli Vineyard Riesling
From a single vineyard in the Eola-Amity Hills sub AVA of the Willamette Valley, this Riesling has balanced acidity with plentiful aromas and flavors of grapefruit, honey and a pleasant chalkiness on the finish.

2013 Brooks Pinot noir Rosé
This rosé is a lovely salmon pink made from Pinot noir grapes from the Willamette Valley. It is very food-friendly with aromas and flavors of bubblegum, strawberries and flintly mineral notes. It’s slightly sweet in the mouth but finishes dry.

2011 Brooks Janus Pinot noir
This Pinot noir is the flagship of Brooks Winery and they consider it the ultimate expression of the varietal. It’s named after Janus, the God who represents balance for new beginnings and endings, the future and the past, and the connecting doorways. Made entirely with fruit sourced from the Willamette Valley fruit, it possesses aromas of black pepper, cherries, tea roses and a distinct earthiness. This Pinot noir is filled with cherries, tart cranberries, black pepper and a kiss of both oak and earth.

Open this bottle an hour or two before you expect to drink it and pour a few ounces into a glass to allow for more air exposure. Give it a taste when you first open it so you can better understand how oxygen can enhance a wine. By pouring a bit out of the bottle, you’ve increased the surface area in which air can come into contact with, thereby increasing t